The Future of Automotive Data Connectivity

Today's cars can sense the world around them and act on the results of that perception. They offer drivers and passengers an unprecedented experience in terms of safety, comfort, convenience and interactivity. Year after year, they continue to advance in this regard.

But cars can't do any of these things without accurate data connectivity. Data connectivity is the "nervous system" of the car, responsible for linking the various sensors and actuators located throughout the car to the car's computing platform, the "brain" of the car. As sensors and computing become more sophisticated and complex, and as the trend toward software-defined vehicles takes hold, the bandwidth requirements for data connectivity are growing rapidly and beyond the capabilities of traditional in-vehicle networks.

We have experienced explosive data growth in other areas such as the data centre, office and home. The decades of experience and lessons learned from them have informed the new challenge of defining data networks for the automobile. However, automotive-grade products or technologies have unique needs. The quest to meet those needs with the most secure, cost-optimized solutions will lay the foundation for even greater innovation.

A new type of network

The in-vehicle network architecture is under unprecedented pressure. Traditional point-to-point analogue connectivity is giving way to digital connectivity. High-resolution radar and cameras require higher bandwidth and speed. The amount of data exchanged between electronic control units (ECUs) within the vehicle will also increase. These demands will grow as software-defined vehicles take shape.

The limited physical space inside a vehicle increases the likelihood of electromagnetic interference. The proximity of so many electrical and electronic components to each other leads to the design of data networks that must resist the electromagnetic "noise" that other components may emit and avoid noise from themselves.

Suppose one of the sensors sends data with latency. In that case, it may be difficult to fuse it with other sensors to get a real-time picture of the vehicle's surroundings, thus affecting higher-level autonomous driving decisions.

High-level autonomous vehicles must be able to recover from failures in a controlled manner. The data network solution should be able to bypass the failed node and ensure that the vehicle continues to drive safely until it is safely stopped.

Every gram of weight removed from the vehicle makes it more efficient and potentially less expensive. In addition, less space-consuming wiring can free up space for other components, which can be loaded with more functionality.

Ethernet has a long and extremely successful history in the IT field. Invented in 1973 and standardized by the Institute of Electrical and Electronics Engineers (IEEE) in 1985, Ethernet then began to dominate local area networks in business applications, fending off competition from all other competing technologies such as token ring networks. Over the decades, Ethernet has proven to be a versatile and flexible standard network that has driven progress in communications. Different versions of Ethernet run on coaxial cable, fibre optic and unshielded twisted pair, and speeds have increased from 10M bit/s to over 100G bit/s. After decades of use, Ethernet is well understood, and improvements have been made.

As in-vehicle networks began to connect more in-vehicle computing resources, the adoption of Ethernet became a natural choice, so in 2016, the IEEE released the first automotive Ethernet standard, IEEE 802.3bw, or 100Base-T1. While 100M bit/s is comparable in bandwidth to 100Base-TX, introduced in 1995, the automotive version There are still key differences.

Both standards run on unshielded twisted pairs, where two copper wires are twisted together along the length of the cable. This produces less electromagnetic radiation and crosstalk, avoiding interference with other wires or components while resisting interference from other sources.

In the 100Base-TX standard, a maximum length of 100 meters is also specified, a length that is followed by subsequent Ethernet standards. The maximum length specified for automotive Ethernet is only 15 meters. Automotive applications do not require long distances between network components in the vehicle, and the shorter the length, the lighter the cabling.

Another key difference is in the encoding done by the transceivers at each end of the cable.

The 100Base-TX standard uses multi-order baseband coding (MLT-3) technology and encodes bits on the wire by cycling through three voltage levels. In contrast, automotive Ethernet uses three-stage pulse-amplitude modulation (PAM-3), which encodes bits by the amplitude of the signal pulse, allowing more bits to be encoded in each clock cycle. Combined with other coding techniques, the final frequency can be reduced from 125 MHz to 66.6 MHz, helping prevent electromagnetic interference and crosstalk.

The IEEE 802.3bw standard of 100M bit/s is widely used today because it meets many basic automotive applications. However, higher speeds will be necessary as engineers consider higher definition video streaming and aggregating data from multiple sensors over a common cable.

Shortly after IEEE 802.3bw was finalized, the IEEE formally approved the 802.3bp standard, or 1000Base-T1, which enables gigabit-level speeds over shielded or unshielded twisted pair cables. This standard has much in common with its predecessor but at a frequency nearly 10 times higher, at 600 MHz. This means that cables are more susceptible to crosstalk, so engineers need to take special care when designing systems to control electromagnetic noise throughout the vehicle, rigorously testing and shielding when needed. The standard will provide sufficient bandwidth for the next two to three generation platforms.

In 2020, the IEEE developed the 802.3ch standard, also capable of supporting Gigabit Ethernet at standard rates of 2.5G bit/s, 5G bit/s and 10G bit/s over a distance of 15 meters. Shielded twisted pair cables can accommodate these transmission speeds, but frequencies above 7 GHz may require shielded parallel pairs to minimize EMI issues.

A key advantage of Ethernet is that it is a more flexible network that can be easily reconfigured. The Ethernet router can send data over a different route if a failure occurs. This is important to ensure that connectivity to important computing components in the vehicle is not interrupted.

Equally important in in-vehicle networks is the ability of Ethernet to transmit power along with the data signal using copper wire as the transmission medium, a feature known as Power over Data Line (PoDL). Power over Data Line can support up to 500 mA of power, which is sufficient for certain sensors, such as optimized satellite architecture-based cameras. This way, automakers only need to lay a pair of wires to connect these sensors to meet their needs, resulting in lighter weight and simplified architectures for the entire vehicle.

Some automotive Ethernet devices require a higher current than the capacity of the data line supply. For this reason, Ampofo employs several unique hybrid connection systems to meet these application needs. These systems combine a high-speed AMEC data port and a traditional DC power line into a single interface, maintaining the simplicity of a single device connection powered by the data line. 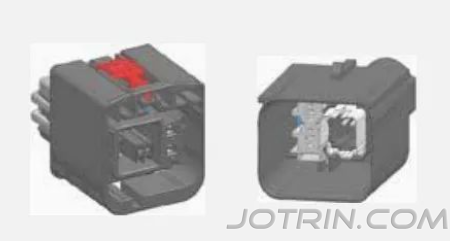 The 2+1 connector has two 1.5mm DC terminals and a shielded 1Gbit/s AMEC interface.

Coaxial cables have long been used for data network connections. Coaxial cables, which contain an insulated wire in the centre surrounded by a shield of conductive material, were originally used for Ethernet and are still widely used for cable television connections today. Different coaxial cables have different performance levels, and specific cables are chosen for automotive applications depending on the parameters.

The robustness and interference resistance of coaxial cables have made them popular for automotive applications, and for more than 20 years, most automotive OEMs have been using a global interface standard called FAKRA (Fachkreis Automobil). These connectors operate well at frequencies up to 3 GHz and can also be adapted to applications at 6 GHz with terminal-specific design features at speeds up to 8 Gbit/s.

The latest automotive coaxial cable applications include digital camera systems in vehicles. Using the high bandwidth capability of coaxial cable, video signals and camera power transmission can be achieved over a single cable.

As applications upgrade from simple backup cameras to complex surround-view vision systems, the size of the FAKRA interface becomes larger and larger. A new generation of smaller coaxial cable connectors is being developed to address space issues in vehicles.

These "miniature coaxial cable" connectors are much smaller than current interfaces and can increase the density of connectors on the same size device end.

Another technology considered for some automotive scenarios is the High-Speed Peripheral Interconnect Bus (PCI Express), created in 2003 as a bus interface for connecting peripheral devices to computer motherboards. The latest version of PCI Express can support transfer rates of up to 128G bytes per second.

PCI Express has a very short maximum distance of half a meter, but it does not require a transceiver, thus saving costs.

PCI Express may be the ideal solution for ECUs in vehicles close to each other.

Fibre optics seem to be a good choice for automobiles, but they have some drawbacks that may prevent their widespread use. Fibre optic lines use pulses of light to transmit data through glass or plastic fibers, which means they do not generate electromagnetic radiation and are less susceptible to interference from other sources. However, the inability to transmit power through fiber optic data lines means that components require additional power transmission. Fiber optics tend to be more expensive and require transceivers to convert electrical signals into optical pulses. Its manufacturing process is also costly. Moreover, fiber-optic wires have a limited bend radius, and it's a tricky problem to get them through tight areas of the vehicle without bending them too much.

Another technology that engineers have considered is multi-core cable technology, where a single cable contains a large number of individual wires. The most prominent example is USB Type- C, which has gained a foothold in the PC world by allowing power and data to be combined into the same cable. However, Type-C cables are limited to only a few meters in length and are expensive to manufacture. They also limit bandwidth to 5Gbit/s per channel and require transceivers to divide data into those channels, adding additional cost.

While more and more data connectivity solutions, such as automotive Ethernet, continue to emerge, some legacy technologies used in cars for years may continue to be used in simple application scenarios at low data rates. For example, the Local Area Interconnect Network (LIN) requires only relatively economical chipsets and connectors. Other relatively economical solutions include Controller Area Network (CAN), which can operate at speeds up to 1M bit/s, and Variable Data Rate CAN (CAN-FD), which can operate at speeds up to 2M bit/s. FlexRay, which can support up to 10M bit/s, is still used in some safety-critical applications, but it is relatively expensive and is expected to be phased out...

The industry has recently introduced a low-speed automotive Ethernet solution: 10Base-T1S, to meet the needs of these applications. While most network technologies are symmetrical, some in-vehicle application requirements are asymmetrical and require only high one-way bandwidth, such as cameras or high-resolution displays. Asymmetric technologies that have been widely used include Flat Panel Display Link (FPD-Link), Automotive Pixel Link (APIX), and Gigabit Multimedia Serial Link (GMSL).

HDBaseT Automotive is an asymmetric technology gaining momentum as it enables the transmission of Ethernet channels up to 4G bit/s with very low latency over 15-meter standard, unshielded twisted-pair wire with an insulating jacket, and up to 8G bit/s over shielded twisted-pair wire. Like Ethernet, HDBaseT uses pulse amplitude modulation, so its physical layer is less complex than other technologies, resulting in relatively low weight and cost.

With the advent of automotive Ethernet, micro coax and PCI Express, there is a great deal of promise for building vehicles that meet these standards.