Since its inception, Microchip has been closely monitoring the market for embedded control semiconductor products. In order to occupy the market, they have concentrated all the resources, technology, design, production, sales and other resources to develop two major products: PIC8-bit microcontroller (MCU) and high-quality serial EEPROM. So far, Microchip has introduced microcontroller peripherals, analog products, RFID smart cards, and KEELOQ security products to design a more comprehensive and valuable embedded control system solution to meet the growing needs of users. 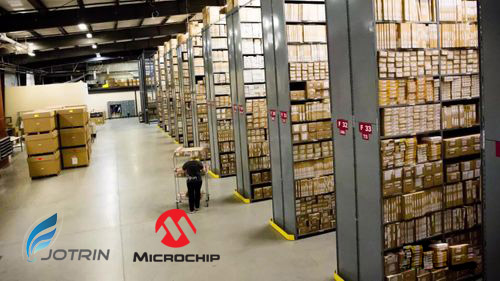 Microchip Technology was founded in 1987 when General Instrument spun off its microelectronics division as a wholly owned subsidiary.

Microchip Technology became an independent company in 1989 when it was acquired by a group of venture capitalists, and went public in 1993.

In August 2012, Microchip acquired Standard Microsystems Corporation (SMSC). Among SMSC's assets were those it had previously acquired from Symwave, a start-up that specialized in USB 3.0 chips, and two hi-fi wireless audio companies — Kleer Semiconductor and Wireless Audio IP BV.

In March 2018, Microchip acquired Microsemi Corporation (NASDAQ: MSCC). The acquisition price represents a total equity value of about $8.35 billion, and a total enterprise value of about $10.15 billion, after accounting for Microsemi’s cash and investments, net of debt, on its balance sheet at December 31, 2017.

Jotrin Electronics Limited. is the one-stop-shop for all board-level electronic components, raw materials and tool requirements. we stock a wide variety of electronic components, including hard-to-find, obsolete and allocated parts, and a great selection of Microchip components. Can't find what you're looking for? If you ever have any questions, concerns or requests, please contact us.